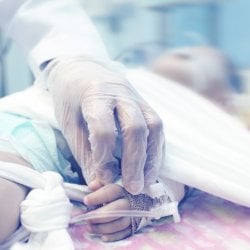 Heartbroken mother will not resuscitate daughter, 3, left in a coma by routine root canal surgery that girl may not even have needed

A Hawaii mother has decided not to resuscitate her daughter after the 3-year-old fell into a coma earlier this month while undergoing dental surgery.

Ashley Boyle brought her daughter Finley into Island Dentistry for Children on December 3 for four root canals and 10 cavity fillings. But when Finley was given the maximum dosage of drugs, she went into cardiac arrest and couldn’t be revived.

For the past month, Ms Boyle has held out hope that her daughter’s condition would improve, but Finley never woke up and she doesn’t want her daughter to live in a vegetative state. She says Finley will probably pass within a day.

‘It sounds like she’s drowning in my arms,’ Boyle told reporters at a press conference yesterday.

Ms Boyle will continue to fight for her daughter even after her death. She has already filed a lawsuit against Dr Lilly Geyer, the dentist who performed the procedure.

In the suit, Ms Boyle claims that Dr Geyer and her associates administered too much anesthesia and didn’t follow protocol to closely monitor Finley’s condition.

Ms Boyle is being represented by attorney Richard Fried who called the maximum dosages of 5 different drugs ‘grossly excessive’.

He cites the American Academy of Pediatric Dentistry’s standards which warn that young children should be monitored every five minutes and that an extra person should be there to help in case resuscitation is needed.

The procedure on December 3 broke both of those rules. Instead of checking Finley’s oxygen levels every 5 minutes, records show she wasn’t checked for 26 minutes which explains why the brain damage was so severe.

And when the girl went into cardiac arrest, a doctor from another office had to be brought in to perform CPR – which Ms Boyle believes is the main reason her daughter fell into a coma.

‘Had it been initiated at the correct time, she’d be walking out of the hospital right now,’ Boyle said.

Finley may not have even needed the fillings. Ms Boyle has been contacted by others mothers who got second opinions after visiting Dr Geyer and found out that her recommendations were ‘either totally unnecessary or somewhat unnecessary’ according to Fried.

Since Finley went into coma, Dr Geyer has refused to comment to the press. As of Friday, the practice’s website says the office is permanently closed.

Finley’s case is extremely similar to that of Jahi McMath, the California 13-year-old girl who went brain dead after a tonsillectomy on December 9. Her parents just won the right to keep Jahi alive on a ventilator, after the hospital where she was treated tried to take her off life support.

Ms Boyle has decided to do a different route with her daughter, knowing the realities of her daughter’s situation from her career as a nurse.

‘She is going to be in a bed with pneumonia, getting turned every few hours. Our bodies can live on forever…I’m a quality of life person. She wouldn’t want that.

‘To see her go from a happy health three year old to going through puberty in a diaper, 15 years later is not a choice I was going to make,’ she said.

Boyle calls the botched procedure a ‘massive tragedy’ that she and her family ‘will have to deal with for the rest of our lives.’