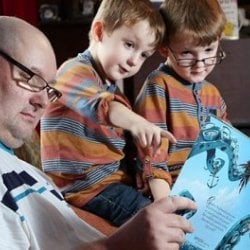 Ian Tibbetts, 43, first damaged his eye 16 years ago when a piece of scrap metal from an oven struck him in the right eye – ripping his cornea in six places.

The wound healed and he returned to work a year later but he suffered more problems and eventually lost the sight in his right eye in 1998.

And just a year later, the former forklift truck driver had lost nearly all the remaining vision in his left eye.

Before the pioneering surgery, Mr Tibbetts had never seen his four-year-old twins Callum and Ryan’s faces – instead seeing them as blurry shapes.

But after the operation, which he underwent in December 2012, he can now see his children for the first time.

He said: “I have my independence back now and I can start looking after the kids while my wife is out at work. Before, the kids were just shapes. I couldn’t make them out.

“I had to actually learn to tell them apart by their voices. I could tell whichever one it was by the way they spoke and sometimes by how quickly they moved.

“I had a picture in my head of what they looked like but they were better. I’m a bit biased there.

“The image in my mind was totally different to how they were – the features. I gave them a big hug and a kiss.

“The sight doesn’t last forever so at the moment I am just taking each day as it comes and appreciating it.

“I would do anything to get some sight back. I had to try something. I said anything is better than what it was.”

Ian, who lives in Telford, Shropshire, with his wife Alex, 35, and their twin boys, agreed to have the revolutionary surgery other all other treatments failed.

The procedure – called Osteo-Odonto-Keratoprosthesis (OOKP) – involves the reconstruction of a new eye using a tiny plastic lens and one of the patient’s own teeth.

The lens is inserted into a hole drilled through the tooth, which is later implanted in the eye.

And as long as the retina is still functioning, the lens then provides a new window through which the patient is able to see.

Remarkably, because the tooth belongs to the patient, the body does not reject it.

The treatment is only suitable for certain types of blindness and can only be performed by one surgeon in Britain – Christopher Liu at the Sussex Eye Hospital in Brighton.

Professor Liu said: “OOKP is not guaranteed to restore sight but it does have a high success rate.

“Patients who have the surgery are often able to see immediately and the quality of sight can be extraordinarily good.

“However it is only suitable for certain types of blindness, specifically patients who have severe and irreversible corneal damage.

“It is a complex procedure and takes a good five years to master it.

“I began working on it in the mid-nineties under the tutelage of Giancarlo Falcinelli, the surgeon who perfected it.

“It was a big commitment and I had to learn Italian in order to work with him.

“But to be able to restore the sight of someone who has been blind for many years is an immense privilege.”