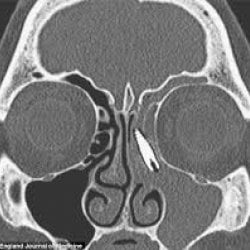 A 57-year-old Italian woman who visited her doctor complaining of facial pain was found to have a dental implant in her left sinus.

Two years earlier, she’d had the dental implant – a 2cm long metal screw which is used to hold a false tooth in place – inserted into her upper jaw.

But a CT scan revealed it had migrated to her sinuses.

At the time, there were no complications but when the woman’s sinus problems were investigated, the implant was found to be missing from her jaw.

Doctors also discovered that her gum had healed over and there was no sign of the implant.

It was eventually tracked down in her sinus – a cavity beside the eye – and removed during surgery.

Following the surgery, the 57-year-old patient found that her symptoms improved rapidly.

She attended a check-up eight months later and still had no symptoms.

Further tests also showed that her sinus had returned to normal and no lasting damage had been done.

It is thought the problem may have occurred as a result of the implant being improperly positioned in her jaw.

Study researcher Alberto Schreiber, of the University of Brescia in Italy, told Live Science that he believes the implant was probably in the woman’s sinus for at least a year, and perhaps even since the surgery two years earlier.

He added that other cases of dental implants ending up in the sinus have been reported.

*The case was reported in The New England Journal of Medicine.

Approximately 40% of the patients enquiring with Dental Implants at our clinic in Turkey need some bone augmentation (bone grafting) to ensure the Implant is able to integrate into the bone successfully. Although this adds to the cost and in some cases another visit is needed this maybe an excellent example of why it is necessary.

It is also imperative to ensure the Implant is 100% titanium and not a standard metal Implant. The human body accepts Titanium and in most cases it does not see it as a foreign body. It can stay in your body successfully for the rest of your life.

After an implant is placed it should be connected to a dental bridge (usually 3-4 months later) or a false tooth. If the patient had completed her treatment in the recommended time after the Implant was placed the implant would not of migrated to her sinus pocket.