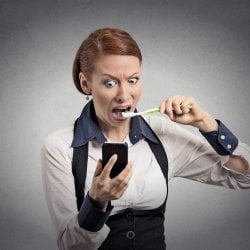 Not many things rustle my feathers and certainly never the newspaper, I usually take factually incorrect articles with a pinch of salt and turn the page. This week was different! I have had many calls from confused patients after reading an article in the Daily Mail entitled ‘Why teeth implants may be the most painful (and costly) mistake of your life’.

The article in full can be read here: http://www.dailymail.co.uk/health/article-2561578/Why-teeth-implants-painful-costly-mistake-life.html

In short the story is as follows…

Trevor Peak spent £25,000 getting his teeth fixed in time for his daughter’s wedding – and soon feared that he’d made the biggest mistake of his life. In total Trevor Peak had seven Titanium Implants placed in his upper jaw. The brand name of the Implants is not mentioned.

At first Trevor was very happy with the result but later the bridge came loose and in his own words it ‘flew out of his mouth at a meeting when he got passionate making a point’. The Crowns and Dental Bridges continued to break off and he even swallowed a crown in the night which he realised when he woke up with a gap! The bridge was re-attached several times however his Implants became more and more loose as his bone continued to shrink.

The article then continues to discuss dental implants and other patients who have reported problems. It also talks about the concern – even panic – within the dental profession about the safety and longevity of implants. The reason, Dr Levin suggests, is that far from preventing bone loss, implants may promote it by triggering a serious infection, different from normal gum disease, which slowly destroys the bone holding the implant in place, causing it to loosen. There is also talk of a new man made disease peri-implantitis,’ The irony is that dentists have opted for replacing damaged teeth with implants ‘because they saw this as being cautious,’ says David Corless-Smith, of the Dental Law Partnership. ‘Yet the opposite is happening. Implants are fuelling a growth in dental litigation.’ While the dental profession acknowledges the seriousness of peri-implantitis, there are different views on what causes it. Some scientists insist new and virulent bugs develop in the crevices around implants. In 2010, Japanese scientists reported finding 112 types of bacteria in the plaque surrounding implants in three patients – and 22 were new species. However, the patients had low levels of the common bacteria that normally cause gum disease. Other researchers, including Dr Levin, say that the bugs are the same but proliferate more quickly on implants. Another theory is that the real culprit is the dentistry. ‘This procedure used to be carried out only by specialists, practicing to high standards and being particular about which patients were suitable,’ Careful selection of patients and a thorough training in post-implant hygiene are the key to successful implants, says Simon Nocton, of The Implant Surgery in Tower Hill, London. ‘Implants are an option only for patients who are obsessive about dental hygiene’.

The dissected article then returns to the story of Trevor Peak who admits that he was advised to have extra bone surgically removed from his thigh and grafted on to his jaw. In Trevor’s words: ‘He said no thanks’. It later emerged that the implants were never properly fixed into his jaw because there wasn’t enough bone there. In fact, Trevor thinks the dentists who did the implants knew there could be a problem! Really!?

My opinion of this article is that it has been dissected and arranged in such a way that distorts the truth. Trevor Peak was advised to have bone grafting which I am positive would of ensured the success of his treatment. Knowing this the Oral Surgeon should have refused to carry out the procedure. That said there was a huge clue for the patient not to proceed with the treatment.

My response to the concern – even panic – about the safety and longevity of implants is this… The fact remains that if your Implants are placed by a qualified and experienced oral surgeon your treatment should be successful. Implants are currently the best option to replace missing teeth and are sure to be the best option for the foreseeable future.

The Dental Implant was not created overnight and mass marketed without trial. The founder of the modern day Implant, Professor Brånemark placed the first dental implants into a human jaw bone of a Swedish volunteer named Gösta Larrson in 1965. Gösta Larrson passed away in 2006 and he still had his original implants in place, fully functioning for more than 40 years.

The message to our patients is simple. Do your own research and do not believe everything you read in the newspaper. In recent years the horror stories of dentistry gone wrong make front page news, Why?…

It appeals to a wide audience and a visit to the dentist is something everyone can relate to. No matter how good our oral hygiene is, we all need a visit to the dentist t sooner or later. These stories are of one isolated negative experience. It is then blow out of proportion with a bunch of other fabricated nonsense in an attempt to make headline news.

The facts relating to Dental Implants remains. Do not be fooled… Implants are the best solution to replace missing teeth and restore your dental health.