HOME / BLOG
New Tooth Appearing From The Gum… Or Is It? 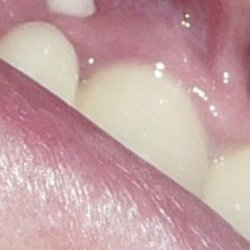 I have not had an opportunity to write many posts recently as the clinic has been unusually busy for this time of year however I wanted to share an experience from one of our dental patients which was brought to light at 3am last week. It was 2:40 in the morning (Turkish Time) and I was still awake when I had a notification about an email from one of our patients who had treatment last summer. I do not remember every patient but I remembered this couple as we have kept in touch about quiz questions and holidays in Turkey since they returned home. I switched on my laptop to check the email…

Our patient had spotted a white circular area above her top tooth on the right hand side. The email read: “It looks as though she has another tooth coming through, it is a circular shape, about 2-3mm in diameter. We don’t know what to do and would like to get some help from you what to do next. I have taken a photograph and I am sending it to you. Can you get back to us as soon as you can or ring us. Thanks again Angela and David”.

Sure enough, there was a photograph. The lighting was not perfect and it was not 100% clear but it was a start.

I checked the time and questioned if calling was a good idea. I knew they were awake as they had just sent the email and I knew they would be concerned as Angela had a dental phobia so it was likely that she could not sleep also. I decided it was a good idea to telephone them and I am glad that the phone call was welcomed although I must say David was shocked in relation to the time but they did say “Can you get back to us as soon as you can or ring us!”

We discussed recent events, Angela (the patient) had been unwell for three weeks with the flu and had a double course of strong antibiotics. Initially I thought it could be an abscess as it is not uncommon when your immune system is low but David confirmed that it was hard like a tooth. I asked if there was any pain and David confirmed that Angela only spotted it by chance and was not in any pain. I could not give a confirmed answer until I had spoken to the Oral Surgeon in the morning. I asked for a few more photos to be taken in natural light and in the morning sure enough they were in my inbox.

The patient had a number of treatments including Root Canal Treatment and Dental Bridges during the summer. The X-Ray taken following the patients treatment did not show any bone fragments or anything unusual at the time but we checked it again just to confirm and everything looked normal. The Oral Surgeon took at a look at the photos and confirmed that it was a fragment of tooth or bone which can happen following tooth extraction or deep root canal treatment. The medical term is ‘bony sequestrum’.

Amazing, don’t you think? The body realises this little chip of tooth or bone is not required and simply expels it from the body!

The Oral Surgeon also confirmed that as it was so far out of the gum that with a little soft brushing it would most probably come away completely, leaving a small hole which would close over within a few days.

I called David and started to explain about the X-Ray review and that I had been in contact with the Oral Surgeon before David stopped me and explained that Angela had brushed her teeth in the morning and it has disappeared leaving a small hole. David said it before I could get the words out however I relayed the conversation I had with the surgeon and explained that the hole would close over in a short space of time and this is exactly what he had suggested (gentle brushing).

David’s voice was relieved and he said Angela was relieved as soon as it disappeared. I asked for their permission to write about their experience. I am sure other people will share this experience and they may by chance find this post. It is of course natural to be anxious about what appears to be a rogue tooth appearing from your gum! David’s response to my request to write about their experience was delightful…

“Thanks yet again for all your help, Angela says you can do what you want with the image. Your service is brilliant and we are indebted to you.

Hopefully we will see you in the warm season for check-ups with the dentist and socially as well if you’re not too busy. Say hello to everyone. I like your blogs by the way, you do put a lot of work in and deserve a lot back”.

Patients like Angela and David are priceless and I thank them for letting us share their story. This story also shows how great a relationship can be between a patient and a dentist or dental clinic. Many people are scared of the dentist but we are nice people who take pain away and are always on hand to give free dental advice (most of the time not at 3am but you never know!). We are humans too and we love nothing more than to build a relationship with our patients where we can talk about life in general such as pub quizzes, the weather and holidays abroad!