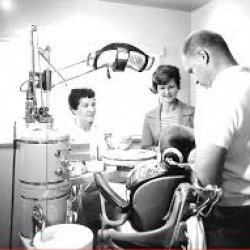 While excavating an ancient Mayan site in 1931, archaelogists found a fragment of mandible dating from 600 AD. It was thought the mandible was from a woman in her twenties. The mandible appeared to contain sea shells. Initially it was thought that the shells were placed under the nose in a manner observed by the ancient Egyptians after death.

Fourty years later in 1970, Professior Amadeo Bobbio studied the mandibular in more detail.  Using a series of radiographs, it was evident that the bone had formed around the shells which showed that they were placed while the woman was alive. It was conculded that the shells were placed to act as teeth. This is believed to be the first recorded use of Dental Implants.

In 1952 Professor Brånemark was conducting a study in relation to blood flow in vivo in a Swedish Laboratory. He devised a method of constructing a small chamber of titanium which was embedded into the soft tissue of rabbits ears (I know, you feel sorry for the little rabbits – believe me so do I!)… Following the study, the surgeon found that he was unable to remove the titanium cylinder as it had intergrated with the bone. This was the first indication of the strong relationship between Titanium and Bone.

Professor Brånemarks curiosity was aroused and he continued his studies, exploring the relationship between titanium and bone. Brånemark proved that in carefully controlled conditions, titanium could be structurally intergrated into human bone with a high success rate. The potential for Dental Implants was confirmed. Professor Brånemark named the intergration process Osseointergration.

Thirteen years after the initial discovery, In 1965 Professor Brånemark placed the first Dental Implant into a human jaw bone. The human volunteer was a Swedish man named Gösta Larrson who was missing teeth due to severe chin and jaw deformities.

*When Gösta Larrson passed away in 2006 he still had his Implants still in place, fully functioning for more than 40 years.

Professor Brånemark published many studies on the use of Titanium as the material of choice for Implantology. In 1978 he partnered with the Swedish defence company for the advancement and marketing of his Dental Implants. Later the company was named Nobel Industries and in 1981 Nobel Biocare was founded to focus soley on Dental Implants and Implantology.

In recent years Dental Implants have achieved widespread acceptance from dental professionals. In many situations Dental Implants are now the first choice for the replacement of missing teeth. The little dental screw is well known throughout the world and is requested by an increasing number of patients every year.