HOME / BLOG
What is Odontoma? 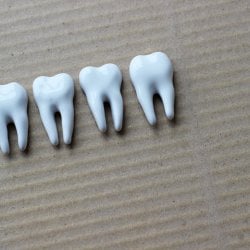 An extreme case of Odontoma was found in India recently. A 17 year old boy had up to 232 teeth like growths removed from his mouth during a 7 hour operation. A large mass had to be chiseled from his jaw line fortunately not leaving any damage to the jaw bone so the jaw line would heal without any deformities.

The boy’s father had told the local newspapers in India that he had thought it was a large cancerous growth. The removal of all 232 marble like structures puts him at the world record for this condition. Prior to that is was the removal of 37 growths had been reportedly removed.  Odontoma is split into two categories: Common and Complex Odontoma, this case was and still is the worst case of Complex Odontoma, so just exactly what is Odontoma?

No one really knows why Odontoma forms. It is a type of dental tumor which is benign which usually forms at the root of a tooth. It is made up of some, if not all of the dental components that make teeth.  It may result from some sort of trauma or in some cases be hereditary. One form of an inherited syndrome is Gardener Syndrome. These growths are not always visible to the naked eye. Odontoma is more often found in young adults around the age of 14 where it looks as if a tooth has not emerged. There are many conditions and symptoms of Odontoma, but they are overlooked.  Most of the time this condition cannot be diagnosed without an x-ray, tomography or an MRI as it appears to be like an impacted wisdom tooth. In some cases the Odontoma causes swallowing to be affected, other cases have seen a growth up into the nasal cavity in which case requires specialist attention.

Should you be suffering from any of the following symptoms contact your nearest Dentist for an x-ray;

Lumps on the gum line