HOME / BLOG
Would you pay £60 for Chocolate Toothpaste? 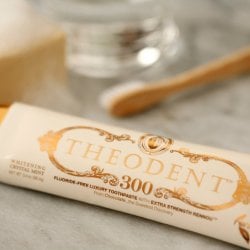 For the child who has everything, now there’s chocolate flavoured toothpaste – which costs £60 per tube.

Luxury oral care firm Theodent use an extract from the cacao plant instead of fluoride, something they say is a family-friendly alternative substance, not least because it tastes like pudding. ‘Harnessing the power of the cocoa bean’, the patented ingredient dubbed Rennou is a safe-to-swallow.

But if users choose to swallow the chocolate-tasting toothpaste, they’ll also be swallowing their own plaque!

The toothpaste range is available through Theodent’s website, through which they ship worldwide, and at selected Foods Markets. Other credentials include that the range is fluoride free, using theobromine, calcium, and phosphate to create a natural alternative, say Food Beast.

Theodent also claims that these compounds not only clean teeth, but actually build up your enamel, making your pearly whites even stronger.

As for why it costs such a steep price has not been confirmed. The classic toothpaste claims to only cost £6 ($10), but is currently unavailable for purchase on the website. But the Theodent 300 – the extra strength paste with extra high doses of rennou – is available for purchase, costing £61 ($99.99) per tube. Multipacks raise the price even higher and shipping costs also apply.

It promises a rich, creamy cocoa flavour to satisfy even the most indulgent sweet tooth. No, it is not a naughty, gooey dessert – but rather a toothpaste that tastes like chocolate. They sound like the most unlikely of bedfellows, but a US company has launched the new flavour for customers with an ‘adventurous spirit or a sweet tooth’.

Priced £3, the Mint Chocolate Trek flavour, pictured, is part of Procter & Gamble’s new Crest ‘Be’ line, which also includes Vanilla Mint Spark and Lime Spearmint Zest. And the toothpastes will still be good for teeth as they also contain sodium flouride.

The firm said it was responding to feedback from customers who said they found toothpaste boring. Depending on its success, the line could soon come to Britain.

John Scarchilli, head of scientific communications for Procter & Gamble, said that getting the flavour exactly right was difficult.

‘We actually use a proprietary flavouring-and-cooling technology that delays the onset of the mint, to let the chocolate make the first impression,’ he said. ‘Holding back the mint long enough – 30 to 40 seconds – lets the chocolate be satisfying.’ But whatever flavour you choose, dental experts recommend brushing twice daily with a fluoride toothpaste.